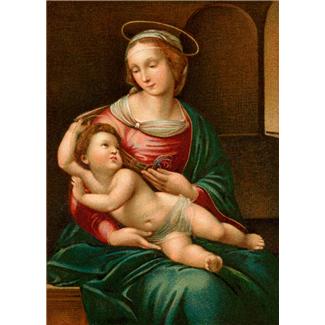 Mary believed that God can and does deliver.  Mary wasn't the only one that  delivered Jesus that blessed first Christmas Day...God "delivered" the Goods --just as He promised He would. Mary thought He was worthy of trust...so I can, too! She is my blessed example.
"Mary" Christmas!

For bereaved Moms, it's so easy for us to get bogged down. We tend to focus only on the pain for the longest time. It feels like an eternity of pain --especially early on in the journey. Seeing anything positive in the future is beyond our ability at that low point of near-desperation.

But it helps me to remember that Joyful Easter was preceded by the horror of Good Friday...And at Christmas, how Mary was asked to believe the impossible -- both before Jesus was born and after His death.

Before Jesus' birth, Mary took that perilous journey of traveling to see her elderly cousin Elizabeth. She must have been somewhat of a risk taker, because it was a dangerous trip for a young girl to take, scholars tell us.  Just as soon as Mary learned that Elizabeth was essentially, having a "high-risk" pregnancy... she was on her way to help out.

Before making that 4 mile trip, Mary had been asked to believe the completely impossible...that Mary would be having a famous baby soon... without her "having known a man." Something that does not happen in the normal course of the way this world operates...!

Wondrous things happened only after Mary essentially replied "Ok, I don't understand how this can be...I really don't get it-- BUT-- I will believe that it can be possible..."

Mary was willing to give up "the usual" and expect the unusual. Something the world at large would have said utterly impossible!


I embarked on my own perilous travel after my family died in the wreck. Just like all bereaved Moms do...
I started my journey attempting to believe the unbelievable about my children being "OK" without me. I felt like I'd just gotten downsized. "OK, you're done, you're through...we have no more need of your services now, thank you." Hell, my baby was still nursing! It was a surreal experience... throwing away in the trash what used to be her nourishment. I was a provider with nobody to provide for anymore.

With Michael and Lisa dying so young, I had no experience of them ever having been on their own...of them being OK without me around. They'd never made it out into the big bad world... All I knew was that I was essential for their survival in this world. I had to suspend that belief and accept another. I didn't want to at first, because I craved the familiar. Time had to erode my jagged, basically self-serving, edges of need.

I wish I could have been more like Mary...She was willing to let go right away, of all her preconceived notions and just "be" alright with not knowing. She wasn't bogged down by our earthly "rules"--knowing that God's enormous creative power, surpassed any earthly regulatory "norms." She patiently waited, she patiently endured...and she trusted even when she didn't "get it."

I really feel (as many) that much inner growth happen after periods of intense suffering. "The name of the Lord be praised" after "the Lord has taken away"... is infinitely harder to do than praising God when our children are held in our arms! Maybe that's why the Pieta is so moving...the deceased Jesus in Mary's loving arms... 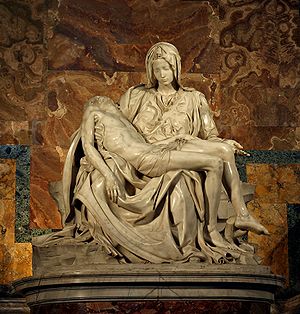 I realize I have a need to always Trust God--to believe that what He has promised me, He can make happen.  I have come to get what it means to "patiently endure." Even when it hurts... beyond "belief."

"Blessed is he who patiently endures trials; for
when he has stood the test, he will gain the victor's crown--even the crown of Life--which the Lord has promised to those who love Him."  James1:12  (Weymouth New Testament)

(P.S. The two verses mentioned in this journal have an interesting numerical similarity- vs. 1:21 and vs. 1:12 )