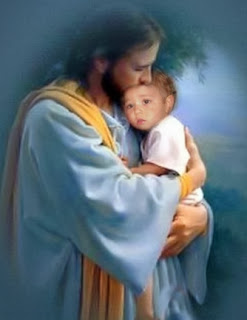 My little boy Michael, all of two years old, was quite a leader for me, in hindsight. It was he that literally pointed the way one day, walking back from the local grocery store.

He got so excited…lifting his little arm as high as he could to point across the street. "Jesus!" he spoke. And again, "Jesus!" I followed the direction he was pointing to…it was a cross! The local Methodist Church was capped by a large cross, and that's what got little Michael all excited!

It was mystifying to me…how did a little tyke as young as Michael, associate that cross with Jesus?
It was very curious…

Coupled with the fact that a few days before, on Sunday while at church, he had everyone around us cracking up. Our Hawaiian priest did the usual Catholic processing down the center aisle-- passing right next to Michael, sitting at the end of the pew. Immediately Michael yelled out excitedly (and quite loudly) "Jesus!" And did that same pointing thing again. "Jesus!" Michael turned to me, almost unable to contain his delight…while all the parishioners around us tried to stifle their chuckles…

I add those two "events"-- with the constant repetition of Michael telling me "Going Home to be with Jesus!"-- which he started telling me about two weeks before the wreck happened. Oddly, Michael only said it inside the vehicle that was wrecked. And only when we were traveling on a highway, which was often, as we lived in semi-rural Wyoming. Tim, driving one day, even joked with me about how that must have meant "Death and Destruction...Ha!" And unfortunately, he was deathly right, as that was exactly what happened during that last trip to my in-laws, to celebrate Christmas...

Not only does God prepare adults before they transition, apparently young babies and children are prepared also... Many a time I felt like an intruder when entering Michael and Lisa's nap room-- after hearing them "talking" animatedly-- although it all seemed like gibberish to my ears! Kidding them about "Talking to your Guardian Angels again?!"…I now believe I wasn't far off the mark at all on that!

What a kind God we have, to come to little children and help them prepare for their sudden transitioning. How much less frightening it would be... to have someone you were already familiar with,  greeting you upon arrival! Babies and little children generally have nobody that has predeceased them-- to recall and recognize when they transition.

My leader Michael's last gift to me, was his smiling at me while trying to keep his eyes open... being unable to do so because it was past nap time. Lisa was unusually quiet, having already fallen asleep. They would wake from their sleep, this time in Paradise. Ready to join the already familiar faces-- of Jesus and their Guardian Angels--their true Best Friends Forever...God is Good. 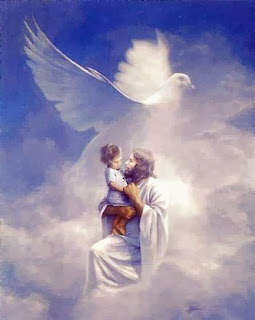