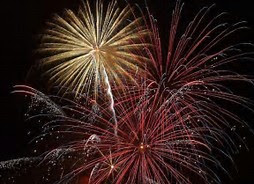 Not until the fireworks show ended and the noisy crowd went home did I even start to think about the future again, this God-given hope I clung to of another round of beauty. My bereavement darkness finally ended, leaving me in constant, joyful anticipation. He that brought me such wonder would yet again bring beauty and after so much time waiting . . . likely a "new and improved" version. When Beauty and  I reunite, this time there won't be any more darkness to disappoint or  keep me from enjoying their presence with me . . . in non-ending, explosions of delight. Don't give up hope!
Posted by DONNA--(Admin) No comments: