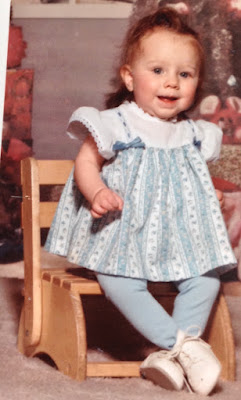 (This portrait photo of Lisa was taken just two weeks before she was killed in the wreck. I am actually behind Lisa's wooden chair--helping to hold her steady. Now transitioned, Lisa is behind the scenes...helping to prop me up!)

March 1st, my daughter Lisa would have turned 32 years old. It seems mind boggling to me, because she was all of nine and a half months old when she went to be with Jesus (along with big brother Michael and also Dad.)

A friend told me recently, that her daughter was 31 years old--noting the similar ages of our daughters.  Immediately I found myself excitedly and impulsively, asking her an impossible to answer question--(noting our difference).

I could only think of positive things. Instead-- I heard how little she got to see her daughter, since her daughter had several kids. You can imagine how I inwardly cringed. I recall telling God  I'd give away all I owned, just for one more second with my daughter (son and hubby).

Appearances can be so very deceiving. That's why, since the wreck happened, I've grown to love the season of Spring. What appears completely dead...miraculously starts to bud and bloom into amazing lushness, once again. We have been fooled! It wasn't dead at all...just waiting to be transformed into something very beautiful.

I have a vine that wraps around an arched trellis in my backyard. The first Spring after I moved in, I really thought that vine was dead, as I saw absolutely no signs of life anywhere on it.

I've found I've got to be careful who I ask, about what is alive and what it isn't. The first person I consulted, was an inexperienced yard care person. He assured me the vine was indeed, quite dead. Wanting one more reassurance before it was yanked out, I asked his boss the same question, the following week.

he told me, pointing out a tiny sliver of green nobody else had noticed.

And that summer, the vine looked more lush than ever.  It was so full of green leaves and shoots vying for the sun, that my windows were shaded from the overhang. I had to periodically trim that vine back so that it did not become completely unruly, due to its massiveness.

All around us in Spring, what looks lifeless... slowly comes back to life and vitality. To me--it's God's way of reassuring us--that our deceased mortal bodies--merely appear dead. And just like Nature...our bodies will once again, return to beauty and vibrancy and abundance.

It's not true that my Lisa is dead. She is alive in Paradise! The essence of who she really is, her spiritual energy,  can never die.  (God's) "Law of Conservation of Energy" specifically states that,

"Energy is transformed and can never die"...!

I try not to dwell on what I "don't" have with Lisa now. To survive the long haul, I've had to shift dramatically-(with the help of Jesus) into believing what I know is coming, but just hasn't arrived yet. I've had to believe in "Lisa's Season of Transformation".

I miss you Lisa... but I won't let myself "go" there, because nothing good ever comes from my dwelling on the reality of my physical loss. Good things have come to you now Lisa. God things. Dwelling on your new life and beauty is what helps and sustains me, until we meet again.

Happy Birthday, my dear, dear daughter. I love you, little Lisa Leprechaun girl. When we finally, blessedly meet again, I'll have a lot of catching up with you  to do! Lots of new growth and renewal will take place. See you soon!

Dear Little Lisa Leprachaun...Happy Birthday in Paradise. I see Big Brandon bear hugging you and lifting you while you laugh the sweet laughter only heard while in the presence of Jesus. Your life still resonates with purpose on this earth through the love of your mother.

Donna, thank you for always being the inspiration on even the darkest of days because just as you celebrate a life brought to you on this day 32 years ago....I observe the transitioning of my son in six days. I am happy that we have a future with our children that was denied us on this earth. God is good all of the time. Sending love and many Brandon bear hugs!

I'm glad your comment was posted on site, Dale...thank you! I appreciate your support. (I'm going to see if I can possibly make mobile comments easier to post.)

I'll be with you in Spirit, as your dear son Brandon's special day approaches...
Donna