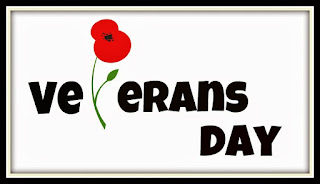 Veterans Day is today. According to Wikipedia: "A veteran (from Latin vetus, meaning "old") is a person who has had long service or experience in a particular occupation or field…"
"Veteran" comes from the Latin word for "old". Anyone that's a survivor of child bereavement, would probably say they've prematurely aged a bit… Young and carefree as a response to tragedy? Not so much…
The definition went on to include this cultural tidbit...
"In Russia, a tradition was established after World War II where newly married couples would on their wedding day visit a military cemetery."
Now I bet that was a real mood upper…!
There are a lot of wounded bereaved Moms out there…wounded from the lifelong battle against "giving up and giving in" to despair, over the physical loss of their child. Being a veteran myself of this "war", I offer a suggestion to those newly in battle.
~~ Don't listen to anything different than what your Commander tells you!  ~~
For Christians, our Commander in Chief--of course--is dear Jesus. He has given us a wealth of ammunition in Scripture, to say to ourselves, and to fight against those enemy forces… that want to utterly defeat us. There is truly, such a generous supply of this powerful ammunition, and constant GPS- like support available,  to all who call on Him for help! Mercy, generosity and kindness available to ALL. He's Omniscient, Omnipotent and Omnipresent (ALL- KNOWING, ALL- POWERFUL AND ALL-PRESENT) We never have to be "good enough", for Jesus to help us, if we sincerely ask Him for His assistance.  Why don't more Christian Moms believe Him at His Word?

There are very many bereaved Moms, that practice self-defeatist thinking. For example, how many times have you heard a bereaved Mom say...
"I will NEVER heal from this!"
"I will NEVER ever enjoy life again!"
And then there's the particularly scary-to-the-newly-bereaved...
"I will NEVER be the same!"
"I will be FOREVER miserable!"
War time tactics always include at least the "possibility" of actually winning the battle...!
In fact, one of the tactics of warfare, is to try your hardest to make the enemy feel they cannot win any battle, whatsoever. This forces them to retreat--to go backwards, putting up no resistance.
Those that are seemingly forever-stuck in severe grief, continually appear to non-stop binge-feed on the deadly woulda/coulda/shoulda trio. (And what you feed...grows!)
"He/She will never ever_____! (insert word)"
"I will never ever ______ ! (insert word)"
"WE will never EVER _____ ! (insert word)"
With that kind of thinking going on 24/7, is it any wonder these poor women are stuck in a deeply grooved brain track, that gets harder and harder to (rewire) get extricated from?
I have often thought of what my response would be, to the following scenario-- regarding my child being "away" for a time.
My child has won an incredible prize. He (she) will NEVER EVER be in want of money, for EVERY SINGLE THING is supplied for him (her) FOREVER! And not only is that supply plentiful, but my child's ability to ENJOY what is so generously given, is increased beyond my wildest dreams! The place where my child now resides, is extravagantly gorgeous, and has the most beautiful LIGHT... because that is actually God illuminating absolutely everything there is in that place with the most refreshing newness! Plus any physical, emotional or cognitive impairment my child had prior to winning this prize… is now totally vanquished! He/she is COMPLETELY HEALTHY NOW! Somehow, this place, additionally has a bonus way, to banish all thoughts of sadness and loss! So he/she is given everything they could possibly ever want, in generous amounts of it, in companion with Jesus Himself and other kindly souls (so he or she is never lonely). Plus here's the kicker...THE PRIZE WINNINGS NEVER GET EXHAUSTED!
But there's just one thing that is attached to this extravagant generosity…I will have to be physically (only physically, mind you) parted from my child...until it's "my time"...to join him or her in this place called Paradise...!
Now back to those perpetually lifeless, grieving Christian Moms...If they truly believed the very assurances of God Himself...can they then continue to persist in this negative, defeatist attitude… indefinitely? I'm not talking about the early years of child loss…that time before the dust settles enough to look out from the foxhole. After all…a gigantic bomb blast just darkened our world to near oblivion...
But later on…when those first stirrings of healing start to surface. That first big smile at something; the first laugh; the first time you "forget"... That time period when the whole direction and course of this bereavement war, is going to begin to be set; as if one starts coming out of a foxhole, looking for safety and some fresh air again.
As a "veteran", I feel it's so vitally important to warn newly bereaved Moms--to not get dragged back into the trenches again--to that constant mindset of intense pain, like at the beginning. No, let yourself begin to heal from this most grievous of wounds…The tide is changing!
"See, I am doing a new thing! Now it springs up; do you not perceive it? I am making a way in the wilderness and streams in the wasteland."
(Isaiah 43:19)
Through Jesus, we have so much to rely on-- to sustain us through this awful journey. Don't let those that are mired in --and stuck for years and years in a constant state of "denial"-- take away your hope. (In my humble opinion, these women tend to be chronically angry women. The least we can do, is to pray for their healing.)
Well beware, because "misery loves company." Negativity can be catching. Positive people like to surround themselves with the like-minded, for just this reason…
I want to be someone that willingly applies God's healing, comforting and salve-like Words, to my situation. I open my Bible, and let God heal me through His Word. The Word that's given to sustain us, and to help arm us against all enemies, enemies that sometimes arise from our own ranks…
BE VICTORIOUS IN BATTLE, MY FELLOW VETERANS!